↓
Home→technical→Grid current, why does it occur?

Grid current are in most cases unwanted, but can in certain circuits be necessary to make the circuit function as wanted, that will be covered in a separate article later. Now I will  look at the causes for unwanted grid current, and what could happen if it should occur.

We do not usually want any grid current in small signal amplifiers (voltage amplifiers), in most cases it will have an unwanted effect and will usually shorten the valve life.

As mentioned grid current is in most cases unwanted, therefore we define it as negative, unlike wanted grid current, which we define as positive. Positive grid current will, in small signal amplifiers, only be the cases where we use it to produce the negative grid bias voltage.

Gas current occurs because the negatively biased grid attracts positive charged gas atoms. These atoms occurs due to collisions between electrons and gas atoms, when this collision occur an electron is unleashed from the atom so the atom gets a positive charge ( it becomes an positive ion) and because of the positive charge it will be attracted to the negatively biased grid. If there is a large resistance in the external grid circuit, it will develop a positive voltage over this resistance. This will in turn cause the grid bias voltage to become less negative, and the current in the tube will increase. This can than have a cumulative effect, the reduction in the negative bias will cause the anode current to increase, and there will be more collisions. The grid voltage will become even less negative and the current increases more, which will give more gas in the valve due to heating of the elements, and so on. The result from all of this can be a thermal runaway and in the end, the result will be a damaged valve. This is most likely to occur if we use a fixed grid voltage, if we use a “self biased stage” it will be more self adjusting because the increased current causes the cathode voltage to increase, which in turn gives a more negative bias to the grid. And it will to a certain degree compensate for the increase in current through the valve.

Gas current is the main reason for the maximum values for grid resistors (the resistor between grid and ground) given by the valve manufacturers. Examples are: 500k for 6N1P and 6N2P, and 1 – 2 M for ECC83 ( 1Meg for fixed bias, and 2 Meg for self bias). It is not advisable to use larger resistors than recommended, though we sometimes see it done. The use of too large grid resistors can in many cases be the cause of a shorter life span for the valves.

Emission current from the grid is mainly due to cathode material transferred to the grid due to high temperature on the cathode. If that has happened and because of the very short distance from grid to cathode, the grid can be enough heated to start emitting electrons. The result of grid emission will be an increase in the anode current and eventually overheating of the valve. Emission can also occur from the screen grid if this gets overheated.  If the screen grid is supplied from a resistor connected to the high voltage, it could get more positively charged due to screen grid emission. Emission from screen (or control grid) could cause the valve to be overheated and the result can be a thermal runaway and a destroyed valve.

Current leak can occur in the supporting structures of the valve. Mica are often used, and it is a good isolator, but in certain cases, especially if the temperature in the valve gets too high, or during fabrication, there can be metallic deposits on the mica wafers. These deposits can then develop further during the use of the valve, often due to high temperature, and can cause leak current between the elements of the valve. This current can be between any of the metallic elements that supported by the structures.  As the picture below shows, that generally means all of the elements. 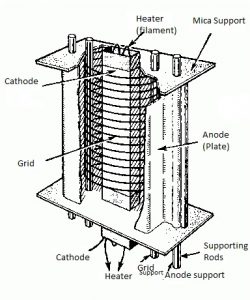 Current leak between the grid and cathode will lead to a reduction of the input impedance of the valve to values much lower than normal. This could have a devastating effect to the circuit around the valve, and may be the cause of a malfunctioning circuit. It can also be the cause of a reduced life span for the valve.

Leak current could also be the source of noise in the circuit, which will be very annoying in a small signal amplifier, e.g. RIAA amplifiers.

As mentioned in the beginning, we sometimes want grid current in a small signal amplifier, this is when use the grid current to bias the grid: Grid Leak Bias or Contact Potential Bias,  and this will be the subject in another article.