We all must be aware of what a capacitor is; it can be considered as two metal objects with an insulator between. It is actually as simple as that. Therefore, there will always be capacitance between the elements of a valve. A valve is actually made of some metal objects with an insulator between. The insulator is, in a valve off course, vacuum. In this text, I will only look at the internal capacities in the valve itself, and not consider any stray capacitances due to the external wiring, this is impossible to calculate because it always will be dependent on the physical layout of the amplifier. So let us look at the valve and see where the capacitances are, and what impact they will have on the use of the valve.

These capacitances are in fact unwanted; we actually call them parasitic capacities, so the manufacturers did as much as they could to minimize them. Another way to draw them, is like this:

Let me show you how this looks, I have altered a spice model for 6N1P-EV, in the original model Cak is 1.6 pF and the frequency plot from LtSpice looks like this:

We see that the stage amplification is constant above 100 kHz.

Now let us try the changed model, with Cak set to 150 pF (I could just have put a capacitor in parallel with the tube, anode to cathode, but I also wanted to test the spice model.):

Here we can see that the amplification starts to decrease slightly at about 30 kHz, and falls off due to the high value of Cak. The total load presented to the stage was 6875 Ohms. (Ra 22k and load 10k) The 150 pF value used for Cak here is not very realistic, but it is just to illustrate how it works. Cak will rarely be problematic at audio frequencies, but should be taken into account at frequencies in the MHz range.

However, the output capacitance of a triode stage does not consist of Cak alone, Cga is connected to the anode, and it has some influence. Moreover, without writing the entire mathematical derivation, the formula for output capacitance is:

Where A is Dynamic amplification =

We can see that the output capacitance is not particularly affected by the amplification because:

The formula for Capacitor reactance is: 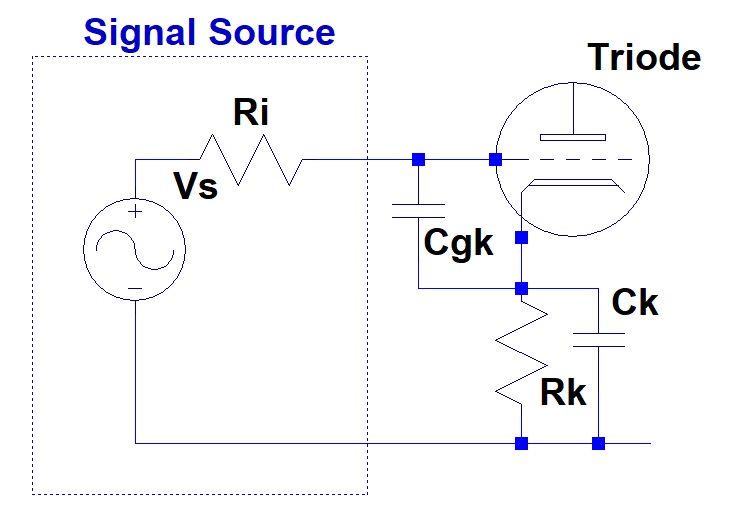 The cathode capacitor Ck has very little reactance in the audio frequencies, so we consider it as a short. Ri (signal source internal resistance) and Cgk forms a voltage divider for the signal voltage. As the frequency increases, and the reactance of Cgk decreases, less of the signal voltage will be presented over Cgk, and thereby to the valve. A high value of Ri will make the frequency where this happens to decrease, and the signal voltage to the tube decreases at a lower frequency. The typical values of Cgk, in the order of a couple of pF will probably not make any problems at audio frequencies, but can be worth considering when designing a filter circuit, and off course at radio frequencies.

Now let us look at Cga, which is the capacitor that has the largest influence on the amplifier stage. This is mainly because it is presented between the anode circuit (output circuit) and the input circuit. This causes it to have a major impact on the stage input capacitance. Let us take a closer look at this, with a restive load to the valve, as in the figure below: 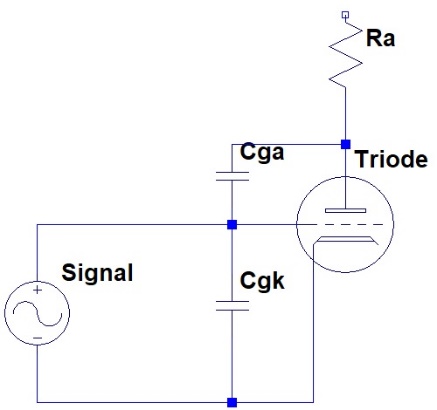 The following will be used in this explanation:

The anode AC voltage Ua are in the opposite phase of the grid input AC voltage Ug, and is presented over serial connection of Cgk and Cga, as in the figure below. 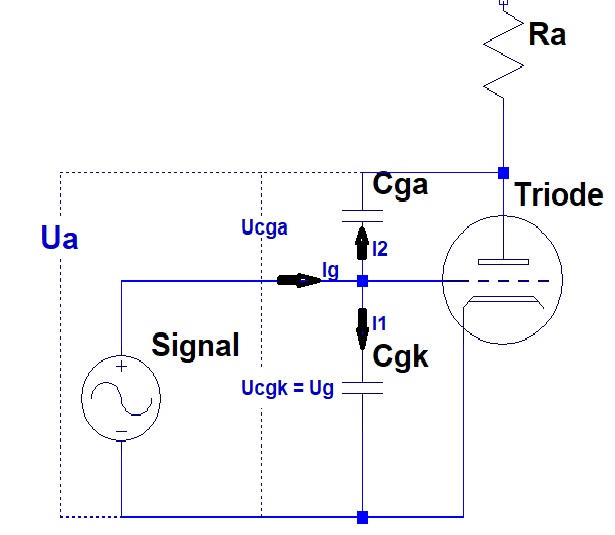 This means that the voltages over Cgk and Cga are in opposite phase and that the voltage over Cga is (1+A) times larger than the voltage over Cgk. The current through Cgk (I1) is 90 degrees ahead of Ug, and the current through Cga (I2) is 90 degrees ahead of Ucga. I1 and I2 are then in opposite phase so when I1 floats down I2 floats up, as shown by the arrows in the drawing above.

By using Kirchhoff’s Law’s we can find that the total current ig, in the grid circuit is:

And this can be written as:

And here I could write a lot of math, which will eventually lead us to a formula for the input capacitance of the valve when signal is connected between grid and cathode:

which actually is the same formula.

Let us calculate an example:

Which is a considerably larger value than both Cga and Cgk and should be taken into consideration when designing a valve stage The input capacitance can also be somewhat problematic if the anode load is reactive, the keyword here is resonance.

All of the above calculations is for a basic cathode circuit, like this: 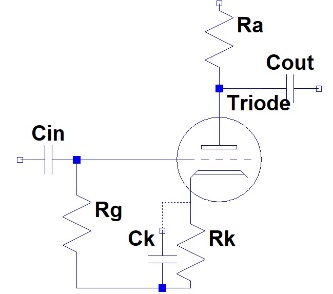 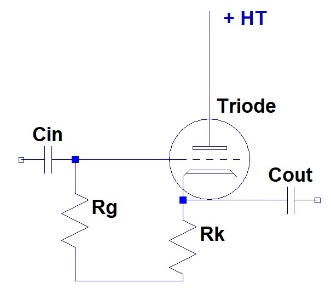 The formula for the input capacitance is (without any math leading to it):

At last, if you want to use a “common grid” coupling, the input capacitance equals Cgk.

Now let us look at the Tetrode and Pentode:

One of the reasons for the development of the tetrode and pentode was the large input capacitance of the triode, and the problems it caused, especially at radio frequencies.

This is the interelectrode capacities of a tetrode: 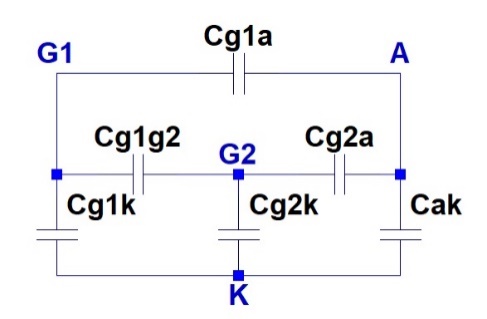 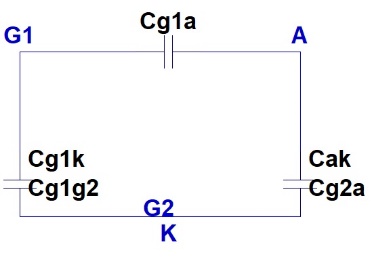 Input as always on the left hand side and output on the right hand side.

The grid to anode capacity of a tetrode or pentode is usually in the order of 0.005 pF, and this avoids the problems with input capacities that we have in triode stages, even if we still has the “Miller effect” in both tetrode and pentode stages.

Let us look at the capacities in a pentode: 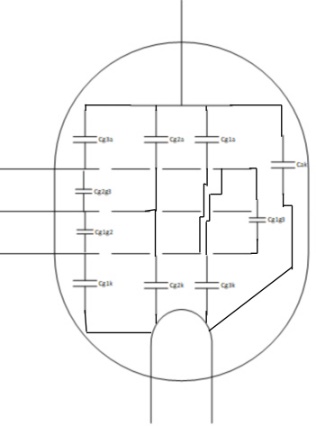 The drawing shows that there is lot of different capacitances in a pentode, but fortunately, it is easy to simplify. The suppressor grid (g3) is connected to the cathode, and the screen grid usually has a large capacitor to ground, unless it is in ultralinear coupling. Therefore, their capacitances are not of importance. This actually leaves us with the same capacities as in the triode, Cg1k, Cg1a and Cak.

Just as in a triode the Miller effect will increase the input capacitance the same way as in the triode, but the suppressor grid is grounded (connected to cathode) so this will help, it will decrease Cga with a large factor depending on the amplification, and the net input capacitance will remain low. For all practical purposes, we can neglect the Miller effect for pentodes, at least when it comes to audio frequencies.

For the pentode, (common cathode stage) we then have:

That is the end of this little primer on tube capacitance’s, without too much math involved.