This is a simplified approach, just to explain how it works.

The principles and calculations are basically the same for a push pull stage as it is for an SE stage, so everything described in the Impedance matching of loudspeakers to output valves article are valid for any transformer, but there are other concerns to be taken when calculating a push-pull transformer. However, let me take a little look at the calculations and the transformer, before we look at the output stage itself.

To use the  formulas to calculate transformers it is important to remember that an output transformer has no impedance in itself; it reflects the impedance and any resistances on the secondary side over to the primary side and thereby present an impedance as a load to the output valves.

The load to valves connected as a push-pull stage is always specified as “anode to anode” (Zaa) illustrated in the drawing below. And since B+ is AC ground, each valve actually sees a load impedance that is Zaa/4,  as long as only one valve is conducting and only half the transformer has current. If both valves are conducting, and then off course both halves of the transformer has current, the load will be different due to this. 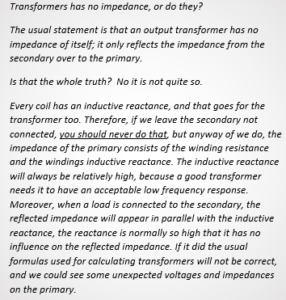 V1 = Voltage on primary side

V2 = Voltage on secondary side

R1 = Impact of R2 reflected over to the secondary side (here: anode-to-anode load)

All values illustrated below: 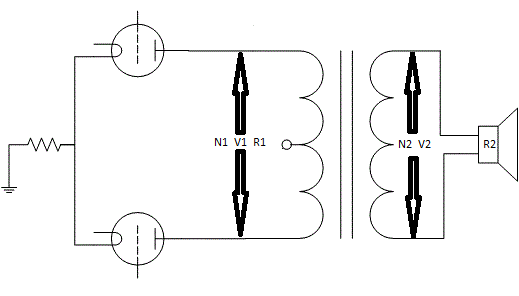 One of the common situations is that we want to calculate the load a given transformer presents to the valves. So let us look at these calculations.

The specifications for the Toroidy transformer, without the primary impedance is:

Let us now calculate the primary impedance of this transformer, we can choose 8 or 4 ohms secondary output for the calculations, the primary should be the same anyway:

The formula solved for R1 (primary impedance) is:

However, we could, if wanted use the 4-ohm tap connected to an 8-ohm speaker, and what would the load on the valves then be? The 4-ohm tap has a turnover ratio of 40.62 so the calculated value will be:

That means, if we use the 4-ohm tapping for an 8-ohm speaker, the same transformer would reflect a load of 13.2 Kohm to the valves. This shows that the transformer has no impedance of its own; it is all due to the turnover ratio.

The spec from the manufacturer is 6.6 Kohm, under the usual conditions, so the calculation is correct. This solves the calculation of the turns ratio as far as the load on the secondary side is concerned, but we also have some losses in the transformer to take into consideration. Let us look at the loss due to the resistance in the copper wire of the transformer itself.

Although this is the usual method used to calculate a push-pull transformer, the a-a impedance is not the impedance each valve sees during signal conditions, more about that a little later.

Now let us take another example, we are going to make a power amplifier with two EL34 Pentodes in push pull configuration. We are going to use cathode bias and 450 volts on the anode. According to the Mullard datasheet, we need the load to the valves to be 6.5 k (Zaa), and the quiescent current should be 60 mA in each valve.

The maximum signal current should be 71.5 mA. The power output will be 40 W. The loudspeakers are 8 ohms.

Now let us calculate the turnover ratio for the needed transformer:

Let us introduce the dc resistance to the case:

When no signal is present, the valve sees only the dc resistance of the primary winding ( actually half of the total primary winding in a push-pull stage, at least in a class B stage). However, as soon as ac signal is present, the valve will see the dc resistance of the primary turns of the transformer in series with the reflected impedance from the load. Let me take an example, and for this example II will go back to the single ended stage, it works in the same way, just imagine that this is half of the push-pull stage seeing half of the transformer:

We have not taken the winding resistance of the secondary into consideration in the formula, but it is reflected the same way as the loudspeaker impedance.

If we look at the data for a real transformer above, the DC resistance of the primary winding is only 96 ohm, and the resistance for the secondary will always be less than this, the normal tolerances among different valves (ri variation) is much larger than this. Therefore, in the real world it will not make any noticeable difference whether it is included in the calculations or not, except when we want to draw the DC load line, or off course if we are designing a transformer, but that is not what this article is dealing with.

We also have other losses in an output transformer, among them are:

Power losses because of setting up the magnetic field, these are hysteresis loss and eddy current loss, these are among the main reasons that a transformer for a SE amp must be a lot larger than for a P-P amp, with similar specifications. There is some more, losses for the low and high frequency range, these depends on the physical construction and design of the transformer, but none of them will be dealt with in this article.

The push-pull output stage will act different in class A than it would in class B, when it comes to how the transformer is used, with class AB somewhere between these. Let us look at class A operation, but first another drawing to explain things. 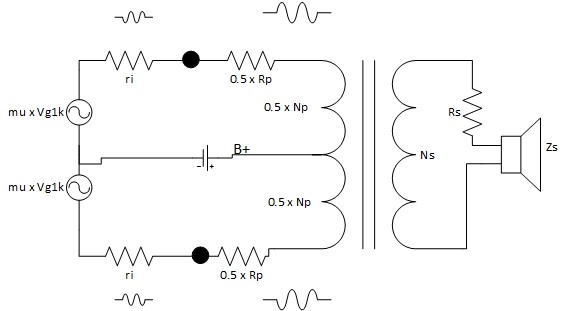 This drawing is a so-called equivalent circuit to the output stage. The following are new to this drawing:

0.5 x Np is the turns for half of the primary (a to a), of the transformer and, 0.5 x Rp is half the total copper resistance of the primary, it will be important later. Everything to the left of the black dots are internal to the valve itself.

Let us first look at what happens in a class A output stage:

In a class A stage both of the primary turns (0.5 x Np) will conduct at the same time, but in opposite phase. That makes it a bit more complex, because the secondary windings will interact with each other, more about this in a later article. The impedance of the transformer presents to the valves will be:

Remember, both the prinary halves conducts curret at the same time:

We can make it a little simpler:

In addition, even simpler if we do not take the copper loss in to the calculation and this is the formula you will use in most cases:

The load (anode impedance) to each triode in class A will be, without copper losses:

Here the primary transformer halves conduct the anode currents alternately. Each triode is conducting or blocking alternately, so here we have only one half primary conducting at the time.

The load to each valve, (because each triode sees only half the primary windings) without the math leading to it, is:

This is for the triode that is conducting, the other triode is blocking and has Za = ꝏ, but the anode voltage is still changing. The load impedances pr. Triode in class B varies between 0.25 times Zaa through Za, to infinity depending on the signal, or put in another way:

Class AB lies somewhere between A and B. and the load impedance pr. Triode varies between:

Because the class of operation changes from A to B during one cycle of  the signal.

We may say that the load that the transformer presents to the valves does not have a constant value for all values of current through the transformer windings. In addition, that goes for the internal AC resistance of the valve (ri) too.

This shows that the dynamic (AC) load line for an output stage actually never will be a straight line, it is in fact an ellipse, but we cannot use that for calculations, so we assume that the load is resistive and that gives us a satisfactory result, but that is not the subject here.

When it comes to selecting the load for a given set of valves, many different compromises have to be made, and selected. I recommend checking the manufacturer’s data.

Although I have presented the formulas above for a triode stage, they are also valid for a pentode output stage.

When specifying an output transformer for an amplifier we usually specify the load impedance wanted a-a (or you could use the turnover ratio), but we also must specify the maximum anode current you expect the output valves to draw.

There are a lot more to say about the design of push-pull power amplifiers, and transformers, but it is not the subject of this article. Among the things not covered are Composite load lines, B.J Thomson method of load lines, most favourable load and a lot of other stuff. Some of which will be the subject of a later article.